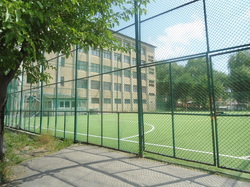 Somes Technological Highschool in Dej is the representative of Romania in this Comenius project.

Our school is a technological one and it has 560 students between 15 and 19 years old. The school is situated in the centre of Dej, a small town having 38000 citizens. It is situated in Transylvania 60 km far from Cluj Napoca city.
Take a look at some photos below. We are sure you will like them! 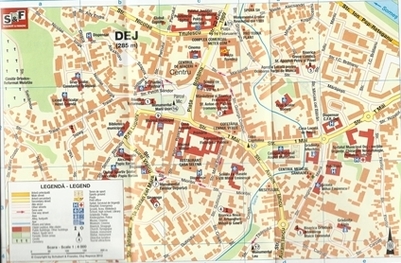 Description of Dej
Either coming from Cluj Napoca, Bistrita or Baia Mare, Dej encounters you with the ambience of an old town where the modern tries not to spoil, but to complete the beauty and the priceless value of what history and people left here.
In those nearly 800 years of its existence, Dej crossed the crucial moments, trials that defined and consolidated its identity. The testimonies and the archeological discoveries of early times which are placed in the Municipal Museum of Dej mention this town as a Dacian settlement and later a Roman one. During the middle ages, the settlement receives the status of center of the Szolnok County which had great economic importance. Robbed and burned down during the invasion of Tatars, Dej raised up I the 14 th century and became a political- administrative, mining, crafts and trade center. Afflicted during the rebellion of Bobalna, the revolution of 1848 and the First World War, the town proved its strategic position and the quality of an economic and cultural center, promoting the identity and the freedom of the people, by its personalities like: Guilelm Sorban, Teodor Mihali, Stefan Cicio Pop, Alexandru Vaida Voievod.
If the past had its say by leaving values in people, works of architecture and art, the present had distinguished itself by preserving the historical heritage , promoting and cultivating traditions and by building a city according to the needs and requirements of the modern world.
By responding to our invitation to visit and meet us, you will enjoy our hospitality, thus becoming part of the history continually written in Dej, the town metaphorically known as "The Somes Gate".

Cluj- Napoca
Cluj- Napoca is situated in the heart of Transylvania. It covers an area of ​​179.5 square kilometers.Surrounded on three sides by hills with heights between 500 and 700 m its aspect dresses like a real fortress . The city is located in the Cluj county , as its residence .
The most important urban center of Transylvania is a city with two names: Napoca is the old Dacian fortress, and Cluj is the Latin word which designated later (coming from Clausum - town being closed stationed between hills).
Cluj- Napoca has always been a cultural and artistic center and it is a tourist attraction , because of the historical monuments of the past , and because of the rich cultural and scientific activities favored by the inestimable value housed in museums and libraries national resonance , the existence of dramatic and lyrical theaters, with wide international audience and not least the existence Botanical Garden - notorious European settlement , inside which is a valuable botanical museum .
Currently the city has a population of approximately 340,000 inhabitants. People who visit the city are happy with what they see and say they will return .
We invite you to discover Cluj Napoca!

Our Comenius group
Our Comenius group has students from the 9th grade to the 11th grade from our school.
Our meetings take place every Monday and Wednesday of the week, after the classes,(from 2 p.m).
We are a united group, a group where each one's opinion can become an idea in practice (films, role plays, drama, pictures, etc), we are joyful people, hard working and serious as well.
We are very proud to be involved in this great project and we are proud of our Comenius Corner which is the "mirror" of our activity. The next step in our activity is to arrange a Comenius Room and we have already started to work on this.

Click here to visit our  blogspot and see all our work.